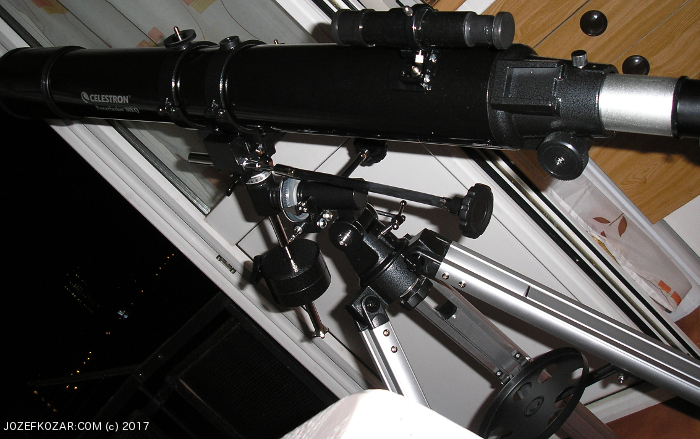 Let me share with you my experience with the telescope Celestron Powerseeker 80 EQ.

I will begin from the reality as it is now for me – I do not have this telescope anymore. For the last couple of months it was a little bit difficult for me to take it with me everywhere, because to be honest – it is a pretty big telescope. On the other hand, I was very satisfied with this telescope. So lets’ take a look on my experience, maybe you will find it useful when deciding which telescope to buy.

I have purchased this telescope back in 2009. I wanted it for my astronomy observations during my free time, especially for watching the Moon. Actually the Moon was the first object which I had seen through this telescope and it was more than awesome. The view was like you were “flying” just right over the surface. Of course, everything depends on attached eyepiece.

For my first observation of the Moon with this telescope, I used the eyepieces included to this telescope. There was also one piece of Barlow lens, but I did not like this much. I prefer to use just the telescope with an eyepiece attached to it.

With this telescope I later observed Saturn, Mars, Jupiter with its moons, the Sun (do not forget to use the protective Solar filter!) and various deep sky objects. All objects were clearly visible with this telescope.

Most of my observations were focused on the surface of the Moon. I was looking for a way to record my observations, because previously I was just drawing them with a pencil on a piece of paper. This was quite nice and kind of “romantic” activity, but my art-skills are not pretty good. So I was looking for a way how to attach some small camera to this telescope and connect it with the computer.

After reading a lot of information how it is “not possible” with this telescope, I have found a very easy way how it is possible. Personally me, I think that “when there is a will then there is a way”, so I did not hesitate and I started to work on it.

I bought a small web cam with resolution just 2 MPx. I know, it isn’t very much, but it was enough for me that time. I had precisely attached the web camera directly to the eyepiece and connected it to the computer.

The software for recording I used the one delivered with the camera. There was an option to take a video, so I was taking a video instead of pictures. Why video? Because it is much easier to take video with the telescope that doesn’t have any time machine attached to the mount. The Earth is rotating, so with some longer exposure times your photos will be a little bit disaster.

When you will play the recording in some video editing software, you can save nice frames as a photos. Or you can make a small trick – just pause the playback and take a snapshot. I recommend you to clean up the photos in some image editor, for example Gimp.

Are you thinking about buying this telescope? I would recommend you to do it. If you do not plan to move very often, then this telescope would be a very good choice. It is perfectly stable, the quality of the materials used are very good (steel, aluminum, glass) and the default set of eyepieces are just enough for all interesting planetary astronomy observations. If you are not sure where to buy this telescope, I can recommend you this store, I have good experience with them.

Dr Jozef Kozár is scientist and writer, studying planets, Solar System and robotic space exploration missions. He is author of seven books, author of several hundreds articles published in various scientific and popular magazines, former public speaker and a documentary movies/TV guest. Jozef's Mars research and the “GNSS for Mars” project became well known especially in 2015, when it attracted many local and worldwide media. Jozef earned his Ph.D. in the field of aerospace from Technical University of Kosice in 2016. During his following career he left his home country and completed a professional university course in planetary science – the science of the Solar System, at the California Institute of Technology (Caltech), Pasadena, California in 2019. View all posts by Joe