These days we are celebrating the 50′ anniversary of the Apollo mission to the Moon. I have collected some of the photos that I have taken during the exhibition last year.

I think that some of these photos may be interesting for you as well. The first photo is the photo of the command module of the Apollo missions. Each mission had its own module and every module used a different name. Can you see the very small space inside the module? Can you imagine that you will have to spend some days inside this small space, but not alone, you will have to be there even with you two other colleagues?

The previous photo actually shows you how small the interior of the Apollo command module was.

Food! Take a look how the food for astronauts of Apollo program looked like. Tasty, isn’t it? I would definitely try, if I could. But only vegetarian, of course! 🙂 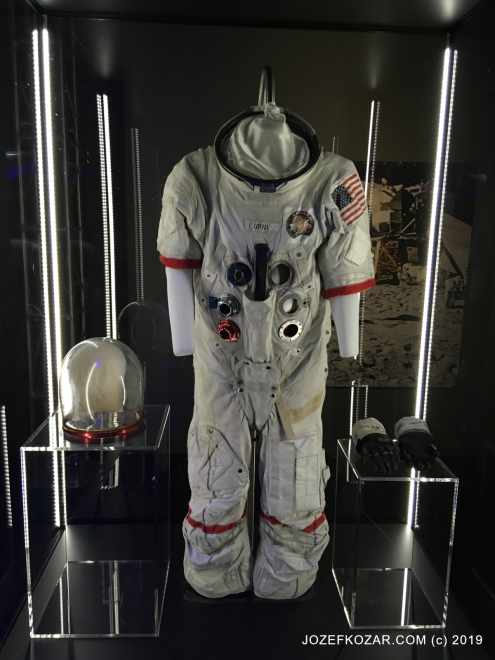 And here we go. This is the spacesuit of Mr. Jim Lovell, astronaut of Apollo 13 mission. Unfortunately the mission could not land on the Moon, but the mission was successful from the other point of view. All astronauts were saved and they came back home.

When you will take a look at the spacesuit that astronauts used when walking on the surface of the Moon, they had a big backpack on their backs. These backpacks are the life support system. This system looks like this when you will open it. The system allowed astronauts to live and exist on the Moon. The system was creating an atmosphere inside the spacesuit.

Every mission requires a recording. Recording of pictures, videos and sounds. The camera above is the one that was used by Apollo 13 mission.

The above one is the voice recorder that was used on the surface of the Moon by astronaut Eugene Cernan (Apollo 17).

Again a camera – this one was used by Apollo 11 mission. You can recognize these cameras also on the front side of the spacesuits of astronauts walking on the surface of the Moon (during the EVA).

Some of the Apollo missions used the electric vehicle – Lunar Rover. The one above is just a replica, because all rovers used during the Apollo missions were left behind on the Moon. Maybe astronauts of some of the future missions will find them. Who knows, how these rovers look like now, after 50 years on the Moon. I think that they are not very damaged, because there is no atmosphere, no weather, nothing except the radiation and some meteorites falling on the surface of the Moon. Who knows, but I am curious as you are! 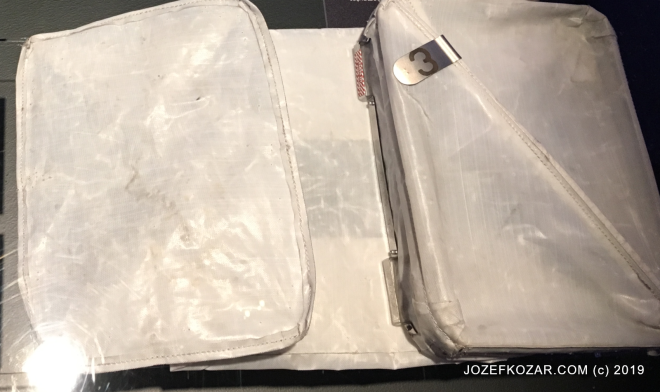 The white bags above are the bags that were actually used by one of the Apollo missions for collecting of the samples (moon dust, soil/regolith, rocks). You can even see the grey dust on them. Yes, you are right, this dust is the Moon dust (or Lunar dust).

And the last photo, but pretty funny one. The photo above is a customs declaration of the material imported to the USA. This is an official document used by the US Customs and Borders. And the crew of Apollo 11 had to sign this document when they were recovered and on-boarded to the USS Hornet aircraft carrier after the end of their mission to the Moon. Actually astronauts were surprised, they signed this document, but of course, this was a joke by the authorities. It is nice to make some fun after the successful mission, what do you think?

Dr Jozef Kozár is an interdisciplinary scientist and writer, studying the planets, Solar System and space exploration missions. He is author of five books, many space technology articles in various popular magazines and also a former public speaker and a documentary movies/TV guest. His research of Mars and the "GNSS for Mars" project became well known especially in 2015, when it attracted many local and worldwide media. More information about Jozef, his research and his books: https://www.jozefkozar.com View all posts by Joe